The story of Shadow, the True Alpha 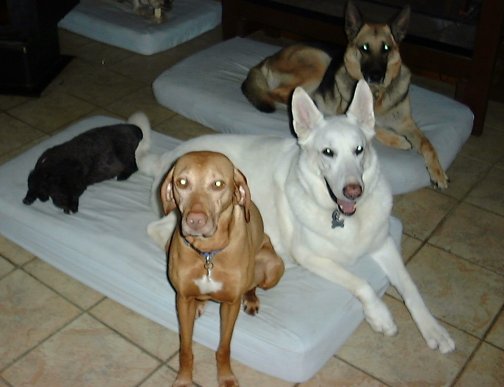 SHADOW WITH SOME OF THE GANG

When I met my husband, Ernie, he had a recently purchased a white German shepherd puppy “Weiss Shatten von Belvue” which he called “Shadow”. At that time Shadow was three months old and already showed signs of rising to the top. He was a large, strong, healthy male with a smart, confident attitude about him that some dogs never obtain. Upon being posed with a problem, this young pup would figure out quickly how to solve it with his brain, and rarely had to use his brawn. For instance, Shadow was only 4-5 months old and was visiting at my house, at that time; I had a sweet, but slightly dominant female greyhound (rescued off the racetrack) who was working on a chew bone. He was wise to the ways of older female dogs, probably due in some part to his mom, but mostly due to the fact that Ernie also had a 12 year old black and tan female German shepherd that ruled the roost (probably even over Ernie). Well, Shadow really wanted that bone which was thoroughly being enjoyed by the greyhound. Instead of barking and trying to grab it from her mouth, he went into the toy box and brought out toy after toy and offered each one to the other dog. By the time we realized what he was doing, there were several stuffed toys laying a few feet in front of the female and Shadow patiently waiting with anticipation for her to give up the prize possession, which she finally did. Then, and only then, did he go and grab the bone and prance off with it triumphantly! Despite our laughter at this little guy, it was then that I knew I had a lot to learn about dogs from this young puppy, while I was teaching him how to live with humans.

Throughout our years with this truly benevolent leader, Shadow has proven himself to be what an alpha dominant dog really is. He is the largest of our dogs and he topped out in his prime at 105 pounds and 26 inches at the shoulder. Friendly in nature and trusting Ernie and I to handle the every day life here, we always knew that he would stand in to help out or protect us if the need should arise. He has always been easy going and obedient, learning his lessons from us and happy to follow commands. He has been loyal to us, without showing resentment to our guest and visitors. There have been a few times, and only a few, when Shadow used aggression to correct an unruly foster dog that had been acting rudely. In those cases it was against a mature dog who was trying to challenge me, Ernie or another member of our pack. Shadow was extremely tolerant of the shenanigans of silly puppies, whose behavior would have tried my patience to the limit.

I remember one particular training dog that came to me to be rehabilitated; she had shown much aggression in her home and had bitten her owners many times. She was here for a short time and was doing fairly well, when I asked her to do something she did not want to do. She started to growl and show her teeth (behavior that worked to get her out of a request at her home) Shadow only had to see that, and in an instant he was across the room, next to me, not growling just standing leaning forward and watchful, quietly waiting and with a look, telling the other dog to back off. With Shadow and I united, the other dog did back off and she never tried to cross me again.

What Shadow taught me about being alpha was that you can lead a pack calmly and firmly without fighting and aggression. You lead by being wiser and staying one step ahead. Alpha is an attitude and it is not about showing who is boss, the alpha does not bully or pick fights, he doesn’t have to! He corrects quickly when needed and moves on, the other dog showing respect and not fear.

Shadow has recently been diagnosed with cancer after undergoing a spleenectomy three weeks ago. We may not have him for much longer, but what he taught us will go on and help other dogs and hopefully the humans they live with.

We lost our Shadow today, after 6 months of many more good times and a few bad episodes where the cancer got him down. He died at 9:30 this morning in the arms of my husband, with me stroking his big head. We both were with him telling him how much we loved him. I will never forget you my friend!